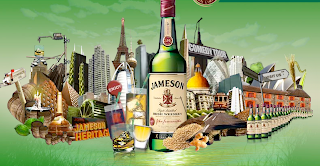 In the summer of 1988, I was in a deep funk. My boyfriend had broken up with me right before I graduated college and I was still devastated. It hit me hard and I was adrift. At that time, my dad had a sail boat and loved to take everyone sailing. The doorbell rang and a neighbor was there to go sailing with my dad. My dad yelled at me to come and go sailing with him, the neighbor and these guys about my age. I almost said no. I was too depressed. There was something about one of those guys, David, that made me change my mind. He did have a twinkle in his eyes. We're out on Lake Michigan on my dad's boat and he tells one of the guys, David, to grab the rudder and steer. My dad is talking to the neighbor and others on the boat. There was a fish and depth finder on the boat but they seemed broken. It was so erratic, it would show the water to be 100 ft deep then 20 ft then 50 ft. All over the map. So this guy, David has the rudder and suddenly he gets my attention and points to the depth finder. It's not being erratic, it shows it to be something like 50 ft, 40 ft, 30 ft. The keel on that boat was 10 - 20 ft. We were about to possibly beach that boat. Maybe? Or for some reason out in the middle of Lake Michigan there might be a sandbar. Or there's a wreck or something. We're both panicking and laughing but my dad isn't paying attention. I tell David to move the rudder or my dad does while he's talking away. Then the depth finder showed 50 ft, 60 ft and then went back to being erratic. Somehow that moment of doom sealed our friendship. He came back the next summer and stayed longer. There were some sweet moments that next summer. Dinner and driving along Sheridan Road. We've kept in touch for almost 20 years through marriages, divorces, moves and all sorts of shit. He might be going off to war for four years and I wanted to see him. So I flew out to San Jose and we had a weekend of Jameson, ghosts, good food and lots of laughter. There better NOT be a letter that starts, "Dear Debora, if you read this, I've been popped...."

I hope for at least another 20 years of friendship. So that when he actually gets diabetes in his old age, I can get revenge for all the punches I got last weekend. Oww!
Posted by Debora Drower at 10:59 PM