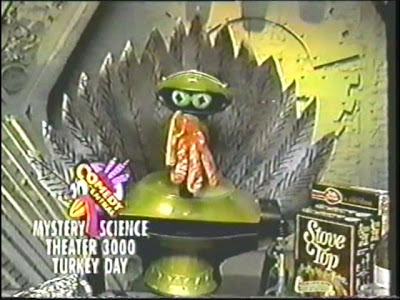 Turkeys are filled with enough L-tryptophan to knock you on your sorry Thanksgiving ass.

Love, Crow
Posted by Debora Drower at 11:54 PM No comments: On my travels I saw this sign and paused. It said Dr. Ugs. Not Drugs. Hmmm. On closer look it was coffee shop. The inside has the original tin ceiling and probably the original soda fountain counter. I heard the owner bought it because she loved the sign (bless her heart!) She has had sign salesmen come in and say she has a very outdated sign and could they sell her a new one. Ha! She's a big supporter of the town of Virginia, IL.

And they made a great pumpkin latte. Get in your car and go visit this adorable town. Now!

Posted by Debora Drower at 11:22 AM No comments: Maybe someone will buy this?
Posted by Debora Drower at 2:04 PM No comments: James and I have just been to the IAICV - International Association of Ice Cream Truck Vendors with our friend McCarty - who does NOT sell Good Humor. Ha! He sells for the Blue Bunny. My job is to fake up photos with his face on them for his coworkers. He hates me. Yet we are a customer of his company so he powers through it - like tequila.

We met this kid, Zach at the convention, who had a list of rules and he's repeat them from memory. Zach's rules:
1. Don't get killed
2. Don't get stolen
3. Don't be a pain in the ass
4. Keep it short
5. Don't run through shrubs.

His dad, another ice cream truck driver, would make Zach repeat these rules daily. I think they should be the new "Everything I learned in Kindergarden..."

Posted by Debora Drower at 9:50 PM No comments: While shooting this - a street person tried to talk to me. I wouldn't answer.I was shooting - duh! He kept trying to engage me. He thought he'd scare me by saying,"What do you think of the new president?" Dude, I'm from a blue state. Down here, red. necks.

Posted by Debora Drower at 8:25 AM No comments:

Obama and my parents Obama and my parents
Originally uploaded by Debora Drower.

My parents have been Obama supporters since the very beginnings. This photo was taken at a fundraiser in the Chicagoland (I so love that term) area in 2004. My parents believe in nothing - really. But when Obama at this fundraiser commented on the guy's house and mentioned he couldn't have white carpet because he had little kids - that won my parent's hearts. We had white carpet in our house but it was my dad and his pipe smoking that was the demise - not us kids. Also there was the Ryan scandal - and it took place in my home town.

I hope Obama wins - then maybe it's a cabinet post for me!

Posted by Debora Drower at 9:31 AM No comments:

My dinner with Andre 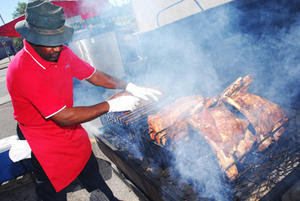 Ok - not Andre but Klecko - but it sounds French. It was the first Saturday of the Month - I call it the bread show at the Saint Agnes bakery. Klecko decided it was French day - he had French sourdough and other french. Maybe he just called everything French. French rye bread, French kolaches. Hell, it was early. Kim Ode was there and we griped about MHS and a possible French girl joining the stable. Inside jokes. Klecko and I have a standing date at Big Daddy's BBQ on retail Saturday. I had popped in just to say hi after an early meeting and yet he was ready for BBQ. Big Daddy's is in Frogtown (French bread, Frogtown, new French chick) And to drink - "Peru" at the bakery.(Better Off Dead movie line) We joked and stuffed ourselves with BBQ. You can kiss your afternoon Au Revoir - because you always need a 3 hour nap after Big Daddy's. Or is it Klecko?
Posted by Debora Drower at 6:33 PM No comments: