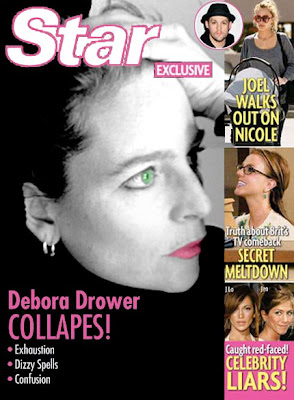 How do you get diagnosed as being "exhausted?" You see headlines like the one I faked up for myself. How do find a doctor who tell the world you're exhausted? Are they on Angie's list or "if you have to ask you can't afford." Who do I call - who do I have to sleep with so I can lie around, watching bad tv and having someone wait on me. Because I am exhausted. I want the diagnoses and the pills and the excuse. I want rock star treatment.
Posted by Debora Drower at 3:10 PM No comments:

My Favorite Fairy Godmother is a national finalist and she needs our votes! 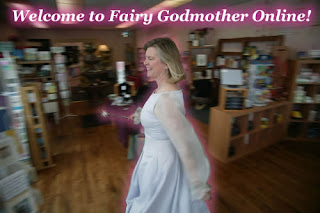 I went to see Terre Thomas at her store after a break up and she had great advice for me. She is a real fairy godmother, can make your wishes come true and she wears gowns to her store every day. Check out the link to her online store below. And please watch the video, register and vote. If you live in Minnesota - I'll go to the store with you. I will.

She's sending out this plea:

In April, local Minneapolis fairy godmother, Terre Thomas, and her gift shop in Calhoun Square, was chosen as one of 50 national finalists (out of almost 2000 small business entries) in the Intuit/Quickbooks Small Business contest. She won $5000 and with a 2 minute video entry of her story, she has the chance to win $10-25,000 for the First or Grand Prize.

Forty percent of her score comes from votes from the public at the Intuit/Quickbooks contest website.

Watch the video and vote* (you have to register at the site to vote; it's just four boxes)

Please vote by May 31st!

Posted by Debora Drower at 7:19 PM No comments:

Candy is Dandy but Liquor is Quicker Candy is Dandy but Liquor is Quicker
Originally uploaded by hanthemansol0
I had a dream the other night about some woman who would only eat her meals on the porch - it was more fun and the food tasted better that way. She would eat dessert inside the house and she demonstrated this by eating some of those candied fruit slices. I have no idea what this means. When I'd go to Mackinac Island with Pat (you do know it's pronounced Mackinaw) island, I'd eat almost all my meals on their gorgeous porch. It is more fun. And yes, we'd have fresh fudge inside at the dinner table.

I've been so tired lately, it's been hard to concentrate - I've been reading these really fluffy novels by Pamela Morsi. Just light candy reading. I love on the covers it says, "a USA TODAY bestselling author." Wow, USA today - a paper sold in a microwave (thanks Clare)

I was on some stupid antibiotics and you're supposed to stay off the hooch while on them. Thanks to a study done by a pharmacy student - I was trying out his theory last night at Dixies on Grand. A not bad BBQ, beers, wine and hard liquor (not very much of each) and I was fine. James got a stomach ache maybe some sympathetic reaction.

That's pretty much all I want in life, eating dinner on the porch, dessert at the dining room table and a glass scotch on the sofa while on the phone. Forget the real stuff - candy or liquor is fine with me.
Posted by Debora Drower at 11:30 AM No comments: Prescriptions - White
Originally uploaded by zacharmstrong
I've been thinking of substitutes this week. The word, the idea. Shown are not my actual prescriptions (I'm on nine at the moment) they are a substitute for my health.

Is it the word "substitute" (the kiss of death in school) or the idea that you're substituting one thing for another. A lesser quality trade.

Ever see some great item on a restaurant menu and maybe it has one ingredient you can't have but the chef refuses to change it. I hate that stupid disclaimer "no substitutes." My mom and boyfriend have some pretty severe allergies - I think a restaurant has more class if they're willing to take out an offending ingredient. Who knows.

I've been having fun learning how to BBQ. The real slow cooked, smoky BBQ. My first attempt was pretty good. To research more, I got a ton of books from the library. I found this one: Cheater BBQ. I had all the pieces to make one of the recipes from that book. It was cold and raining and I wanted dinner in less than 2 hours. I had a bottle of liquid smoke but the last time I used it - the results really sucked. So I followed the instructions, mixed the spices and the liquid smoke and broiled the chicken in my oven. Faux Q. (Say it, ha ha ha) It wasn't a five hour smoked piece of meat - but it was pretty good. James and I shared a bottle of wine with the faux q, my last drink for at least two weeks while I go on some pretty hardcore antibiotics. I love having a bit of scotch or rum at night before I go to bed. But I cannot have any alcohol. So I'll need a substitute for that. (Substitute my coke for gin) I actually have put a few drops of rum flavoring in my pop. I'd rather not get hung over by having some hideous medical reaction.

That got me singing the song, "Substitute by the Who". (Substitute my coke for gin) And I found a cover done by the Ramones that I can't embed. That's funny.
Posted by Debora Drower at 12:58 PM No comments: