Get Me A Shotgun

Too annoying!
Posted by Debora Drower at 3:08 PM No comments: My dad always wanted someone to invent a skinny pill. I'm with you, dad. There is no magic skinny pill.

Posted by Debora Drower at 11:21 AM No comments:

When my sister was a wee thing, we were in Arizona. It was hot and she was tired and crabby. She's whining and crying and my mom was getting sick of it. Finally, my mom decides to ask her what why she was so upset. My sister says she has cactus in her pants. My mom in a fit just pulls down my sister's underpants. There it was - some tiny piece of cactus in her underpants.

Sometimes it is that easy to make it all better. Sometimes it's the Mexican food that makes it feel like you have cactus in your pants.

Posted by Debora Drower at 11:20 AM No comments:

Dogs hate the cone of silence. This doggy looks so sad.

It's like the Get Smart cone of silence:
I need the cone of silence to block out everyone else. I'm a sad doggy WITHOUT one. Give me a cone or I'll scratch my wounds. Grrrrrrrr.
Posted by Debora Drower at 1:03 PM No comments: 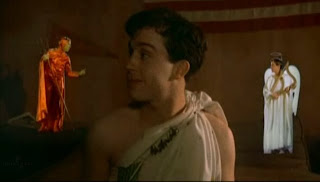 My local paper, the Pioneer Press has this great column called Sainted and Tainted. Anyone can write in write good or bad (Sainted or Tainted) moments that happened to them in St Paul. Mostly it’s about wallets returned, restaurant bills paid anonymously – lost dogs found. The tainted ones are the best. This was in today’s paper.

TAINTED
The reality TV show "Greatest American Dog." I grew up watching "Lassie" and have loved dogs my whole life. When I heard a commercial for "Greatest American Dog," I thought, why not watch it? Ten minutes later, I turned it off. I did turn it back on after about a half hour, hoping it would have gotten better, only to see the dog owners in grass skirts.
I know this is reality TV, but we humans have sunk to a low level, having our dogs act like us. It was pitiful, and I think those dogs need to adopt new masters.
Kathy Hamilton, St. Paul

I can see why umm she uh um What! Because of grass skirts! Dogs acting like us (?) Yes, of course.

Tainted and hideous. See for yourself: 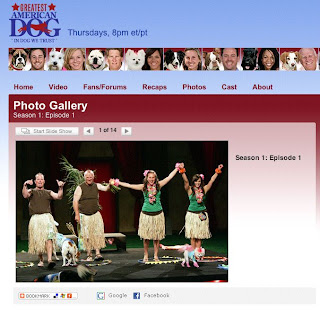 Posted by Debora Drower at 11:49 AM No comments: In 2000, I went on a road trip to Austin, TX to see a good friend, Caroline. I took alot of side roads, shot the shit. You know. I traveled a bit on Route 66 and found this gorgeous old thing.

In November 2007 - I went on a road trip to Austin, TX to visit her again. I took the Lincoln Highway and other parts of Route 66. I have the world's greatest travel white noise generator/alarm clock. - it goes with me everywhere. Caroline and I take a road trip while I'm visiting her and of course plug in the alarm clock. When the alarm goes on, the white noise goes off. Then I start hearing shit in other hotel rooms. And that's what gets me up. Caroline is sound asleep after the alarm goes off. She's sleeping so soundly, that I think she's dead. Finally she wakes up - the best sleep she's ever had. I tell her how freaked out I was. The next morning - I'm a bit better prepared but it's like we're at the famous Hotel Chelsea where the Warhol superstars stayed. Is she Edie Sedgwick? It becomes the running joke.

I just sent Caroline a similar white noise generator (a much overdue birthday present). I didn't even know her neighbor would let her alarm clock go off for an hour - in her own Hotel Chelsea. Maybe someone got the neighbor girl a white noise machine. And Caroline tells me it's the best sleep she's gotten since the Motel Chelsea.

Posted by Debora Drower at 11:36 PM No comments: Damn you Little Debbie and Mrs Freshley. I love your 100 calorie products. Which by the way, Deb, you seem to be ashamed of because they are buried on your web site. Mrs Freshley's is a bit more out out in the open. Can I buy your products at my local grocery store? No. I have to gird my loins, suck it up and go to a Super Walmart to obtain your products. Is Super Walmart any where near my house? No fucking way. It's a trip to East Jesus nowhere. But the dazzling array of snackitude when I arrive is almost worth the trip.

Damn you both for my snack jones.

Posted by Debora Drower at 11:44 AM No comments:

I don't believe in you. Dear god
I wont believe in heaven and hell.
No saints, no sinners,
No devil as well.
No pearly gates, no thorny crown.
Youre always letting us humans down.
The wars you bring, the babes you drown.
Those lost at sea and never found,
And its the same the whole world round.
The hurt I see helps to compound,
That the father, son and holy ghost,
Is just somebody's unholy hoax,
And if you're up there you'll perceive,
That my hearts here upon my sleeve.
If theres one thing I don't believe in...

Its you,
Dear god.

Posted by Debora Drower at 2:38 PM No comments: I was feeling sluggish the other day - moving as fast as Jabba the Hut. Driving to get a massage from a dear friend of mine. We exchange stories during the massage. I was feeling dull and felt I had no stories to tell her. Last time she told me about a Werebear that got me laughing. I told her I was feeling like Jabba the Hut. And she responds in that guttural way Jabba talks. And we both started laughing. Then the conversation morphed into people who talk like cartoon characters. She knows a man who talks like Mr Lunt of Veggie Tales. I know a guy who talks like one of the characters from the movie, Galaxy Quest.

Pretty cool to walk in as Jabba and leave laughing.

Posted by Debora Drower at 1:25 PM No comments: