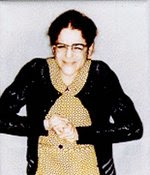 Emily: Whats all this fuss I keep hearing about violins on television? Now why dont parents want their children to see violins on television? Why, I thought the Leonard Burnstein concerts were just lovely. Now, if they only show the violins after 11:00 at night, the little babies will all be asleep. And they wont learn any music appreciation. Why, they'll end up wanting to play guitar, and bongo drums. And go to Africa and join these rock and roll outfits. And they wont drink milk! (Slams fist pn desk.) I say there should be more violins on television! (Chevy taps her on the shoulder.) and less game shows! Its terrible! the way they...what, what?!

Chevy: Miss. Litella, that was violence on television. Not violins. Violence.

I may have been seeing alot of violent movies. Or violin movies. Ha ha ha.
Posted by Debora Drower at 1:38 PM