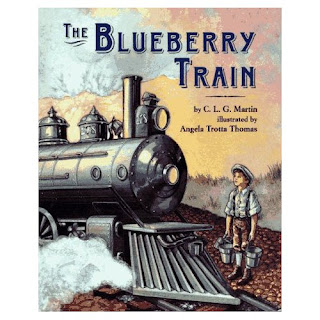 ...Were it not for the approach of a train winding up the mountainside. The tracks were just a short distance from where I was, and I knew it was going to go past me.

“As I watched it draw close, I was greatly agitated. I wanted to stop it because I realized that if it were going to come to me, it would have to leave me, too. And because I grieved in advance for its leaving, I decided to stop it, even if it meant that I had to destroy it. Do you know how contrived to do that?”

Peter Lake shook his head to show that he didn’t.

“I was going to throw a blueberry at it,” Harry Penn said in a hoarse whisper.

“I got the biggest blueberry I could find, and went to wait by the side of the rails, stricken with guilt that I was going to slay a fine train, merely for my love of it. I remember that as it came closer and began to bear down on me I was trembling with remorse. At the very moment the seventy-ton locomotive pulled up even with me, I forsook the world, and threw my blueberry at it.


“The next thing I knew, I saw the caboose rushing away into the meadows where I had been afraid to go because there were too many bees in the wildflowers, and the train continued on, disappearing into the bright snowfields at the top of the ridge.

“Never my life have I been so relieved. With that terrible weight off my chest, I skipped down to the hotel, and resolved not to throw blueberries at locomotives.”

I wanted to stop it because I realized that if it were going to come to me, it would have to leave me, too.
Posted by Debora Drower at 11:28 PM