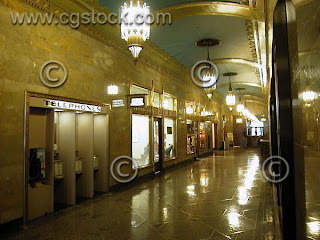 I had to get up and get my boobs mashed in a parking lot by the U. Or at the delightfully named Cancer Center. Uh um thanks. Geez, I hope not. It sucked - but the upside is that it only hurts for a bit. Alot of women don't get them for that few minutes of pain. I told the lady it would hurt alot more to get them cut off. She agreed.

I was up and out so I went to the allergist at the Medical Arts Building. I love that place, it has all sorts of gold accents and fixtures. That blue ceiling. You'd swear there were constellations in that ceiling (Right, Peter Lake!) And hidden away are these cool 3d letters. Anyway, walking around Minneapolis, it felt like I was in a bigger city, like New York. That energy, the sparkle. I was walking fast and no one could stop me. If the sun had been out, the sidewalk in front of the Hilton would've been sparkling. The only other place I've seen sidewalks like that is in New York. Says George Benson:

Posted by Debora Drower at 3:48 PM

Enjoyed visiting your blog when I was taken to it randomly after checking mine today (clicked 'next blog').

Loved your pictures on Flickr. Is there a name for that type of commercial business sign art from the mid-20th century? Perhaps "Post War American Display" would be a good description of it.

Anyway, coincidentally, I'm one block away from Broadway here in New York City right now. Broadway on the Upper West Side.

Thanks for letting me visit and peruse your "Private Idaho".