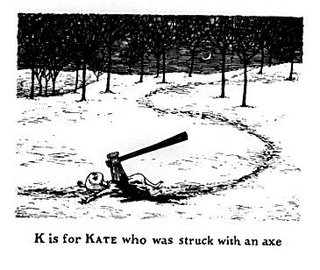 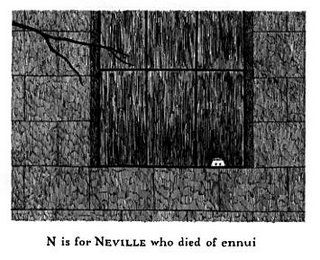 Back in college, I worked at a place called Jeron Camera (now Wolf Camera). My boss, Marv, was a hoot. He had all sorts of weird things in his office. He had samples of fake hair that he'd bring out. He liked that none of us overlapped in hair color. Silly, crazy. He'd ask you if you'd seen the picture of his kid and then he'd point to the picture of K is for Kate on his wall. I loved it. Since he only had that one picture - I had no idea where it came from. Discovering the whole alphabet poster in some mall poster store I bought it in Marv's honor. But during a move it got horribly torn and I threw it away. I don't know what made me look for it today. Maybe because of the ennui (my personal favorite) Or see the whole alphabet!
Posted by Debora Drower at 2:24 PM