I've seen pictures of this place in the paper. This is an old picture.
Thanks MNHS!

From MPR, "The spring that feeds Coldwater Creek spills into a stone-walled reservoir built well over a century ago. The creek flows into the Mississippi River near where it meets the Minnesota River. Many people point to the spring as the cradle of modern Minnesota's existence. As the clearest and fastest flowing water source in the area, it was an amenity for the U.S. Army soldiers who built nearby Fort Snelling in the 1820s."

But it's on Government property. And you can be shot if you try to get on the land. Or something similar. I was wandering around on Saturday on path that runs parallel to the bike path. I could see a historic marker probably near the spring from this high vantage point. And a security guard in a car with a cheesey security logo. It was good recon to see where he parked. On Sunday, I went back but I took the path that runs through the state park. It's shady and foresty and really pretty. I tried to remember where the spring was - it's hard to see the buildings from the state park path. Then I find a big hole in the fence and a government warning sign. Ok ok they'll shot me or make me listen to Rush Limbaugh. I creep up the hill - like some old NBC or CBS mystery movie. Just like Crow and Tom. I creep up the hill, and I don't see Mr Security and there it is! The spring and the old building looking a bit more worn. 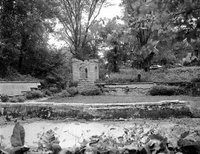